Men as victims of honour related violence: a brisk turn in policy? 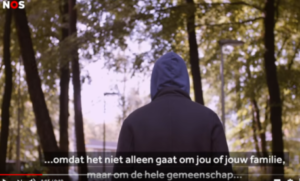 A few weeks ago I saw the video film ‘When your family sends a killer’ (‘Als je familie een moordenaar op je afstuurt’, in Dutch). I recommend you to watch this important video film.

Note that the video film is in Dutch, but you can switch on the automatic subtitles provided by Youtube (look here for instructions).

The main message of this video is that men and boys can also be victims of honour related violence. But there is more to it.

According to the Dutch Police Expert Center on Honour Related violence, they find that in fact more men than women are victims of HRV.

I applaud the fact that this is brought under attention! My compliments to the makers, but also to the interviewees who had the courage to tell their stories.

As it happens, since about 2005 I have been telling and writing that men can be victims of HRV, as well as that women are often perpetrators. HRV, the conclusion must be, is essentially not a gendered, a female-male, issue. This insight cannot be entirely new.

Apart from this message, I believe the film provides other important findings regarding HRV, which will have important consequences in Dutch policy regarding this phenomenon.

Differences: The commentators vs the interviewees

In the film we hear a considerable discrepancy between the words of the two commentators on the one hand, and those of the interviewees on the other.

The commentators talk about the family and what family members might find of something. A family might be ‘opposed against your relationship’ because your ‘partner’ does not meet ‘your family’s demands’.

Is honour related to your family’s opinions on matters? Is it that your family members feel awkward because of your sexual identity? Or that they do not like your ‘partner’ and reject him or her? Or, as Mrs Jansen tells us, that a family loses its honour when a member diverges from a family’s ‘code’? Is honour merely about rigid and traditional families?

What does ‘Yasin’ say?

‘Yasin’, who prefers to remain anonymous, however, says quite something else:

It is not about you or your family but about the whole relatives and what they will say.[1]

The problem is, according to ‘Yasin’,

the shame to your parents and siblings.

Moreover, since he says that his friend was beaten up by his cousins, they too must have been exposed to the impact of this ‘shame’. (In this fragment I understand shame in the sense of German ‘Schande’, not as the feeling of shame, which obviously can be result of being ‘shamed’.)

The shame an individual, male or female, inflicts to his or her family is, I believe, the same as a moral stigma: an entire family can be expelled from a community because of morally unacceptable behaviour of one single member. In the scientific literature this phenomenon is called a stigma-by-association (or a courtesy stigma, Goffman 1963; Condry, 2007).

Social exclusion, say ‘being bullied’, is terrible for any individual (Williams, 1997). Note that small children will be traumatized as much as adults when their whole family is socially excluded by people in the community.

In this context it makes sense when family members become furious at the individual they consider the cause of their misery, regardless of our sympathy for ‘Yasin’ and his friend.

To my understanding in the film honour killing and blood revenge are mixed up, even though in both honour is the main issue.

In the case of the homosexual young man, ‘Yasin’s friend, who was persecuted and seriously abused by his own family members the issue clearly must have been his sexual behaviour. His family members got angry with him. For this reason, his case can be categorized as an instance of domestic violence. The friend may actually have escaped from an honour killing.

In Celal’s story, the intended violent act is a response to an earlier murder. Celal’s family was furious at the other family, not at Celal.

When one family responds to the murder of one of its members with murdering the murderer, this is known as blood revenge. Blood revenge is obviously not related to sexual behaviour, nor is it a type of domestic violence. Nevertheless, the film informs us, it is honour related.

But blood revenge is about more than anger and vindictiveness. Let us listen carefully to Celal’s words:

Two cousins of mine had been murdered. Our family had to take revenge. If you don’t, you count for nothing, you are cowards.

Clearly, Celal’s family too feared a social stigma. In their case, the stigma seems to be related to whether or not they respond when someone murdered their relatives. Those who do not respond are cowards. Only when Celal started talking to his peers about his family’s intentions to take revenge, they again showed him respect.

Can an entire Kurdish family be socially excluded when other people find them cowardly?

Interesting: according to Celal his family, after some deliberation, did not kill anybody. What happened next?

Time for a fundamental redefinition, perhaps?

[1] In the Dutch translation provided by the makers of the film, ‘relatives’ is translated as community (‘gemeenschap’). Although is quite likely that ‘Yasin’ actually meant community, he did say ‘relatives’.

Are you interested? Read my other blogs! Or have a look at other pages on this website (like  this one). As you are here already: I recommend my trainings ; you can also book me for a presentation or lecture! Alternatively, have a read one of my books (also in English) or this article (in Dutch), which I wrote with dr. Yvette van Osch. You may also have a look at a series of articles on Sargasso.nl (in Dutch).

Finally, I welcome your emails or telephone calls!